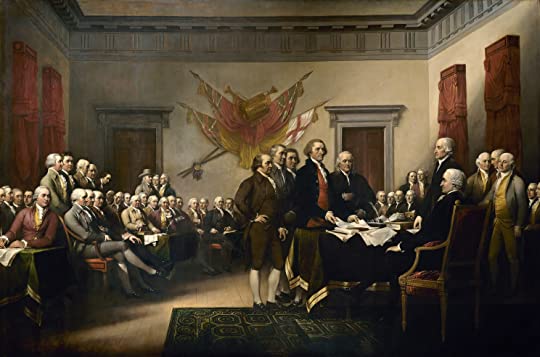 Writing is a difficult habit, even more so that there fewer people reading. We do not live in a literate society. Yes, people can read, but reading is not the same thing as literacy despite what the CIA World Fact Book might say about a nation’s illiteracy rate. This is the problem when liberalism does as it does–quantify everything into numbers and digitize it. Digitization leads to illiteracy, I’d argue. People can certainly sound out the letters and attach rudimentary ideas to them, but when arguments boil down to pointing at headlines and asking the supposed smart set “what’s the last non-fiction book you read” can utterly devastate them, it doesn’t really signal any meaningful literacy.

There are Burkean conservative types like John Michael Greer or quasi-libertarian types like John Taylor Gatto who bemoan the loss of the kind of democracy that was once prevalent in America, the type that Alexis de Tocqueville marveled at when he looked at the American project as an outsider. Writing on what literacy meant two centuries ago, John Taylor Gatto reports in The Underground History of American Education:

“Looking back, abundant data exist from states like Connecticut and Massachusetts to show that by 1840 the incidence of complex literacy in the United States was between 93 and 100 percent wherever such a thing mattered. According to the Connecticut census of 1840, only one citizen out of every 579 was illiterate and you probably don’t want to know, not really, what people in those days considered literate; it’s too embarrassing. Popular novels of the period give a clue: Last of the Mohicans, published in 1826, sold so well that a contemporary equivalent would have to move 10 million copies to match it. If you pick up an uncut version you find yourself in a dense thicket of philosophy, history, culture, manners, politics, geography, analysis of human motives and actions, all conveyed in data-rich periodic sentences so formidable only a determined and well-educated reader can handle it nowadays. Yet in 1818 we were a small-farm nation without colleges or universities to speak of. Could those simple folk have had more complex minds than our own?”

On the topic of democracy, as literacy and democracy in its highest ideal are linked, John Michael Greer expounds on this at same length in his book Decline and Fall.

“It’s common enough to hear claims that American voters of previous generations must have been as poorly equipped in the skills of thinking as their equivalents today. I would encourage any of my readers who want to make such a claim, or who like to think that the inhabitants of our self-styled information society must inevitably be better at thinking than people of an earlier age, to take the time to read the Lincoln-Douglas debates in their entirety, and then compare them to the 2012 presidential debates. Lincoln and Douglas were not speaking to a roomful of PhDs. They were in a hotly contested congressional election, in front of audiences of farmers, millworkers, shopkeepers, and craftsmen, the ordinary voters of 1858 Illinois, few of whom had more than an eighth grade education and many of whom had much less. It does not speak well for the pretensions of today’s America that its presidential candidates in 2012 pursued their debates on a level that a crowd of Chicago feedlot workers in 1858 would have found embarrassingly simplistic. Nor was this unique to 2012; it has been true of almost every American presidential debate since the 1960s.”

I have a gentle sadness for what America once was even though I knew there were some rotten roots from the start. That democracy in America was because America was a Protestant, Anglo-Saxon construct and it carried with it that Protestant work ethic and value in self-education. My Muskrat ancestors must have admired something in that at least since they were willing to stick around instead of going back to Quebec.

Brandenburg Concerto No 1 in F

Speaking of what was great in Protestantism, this week’s music is Brandenburg Concerto No 1 in F by the great master Johann Sebastian Bach. I won’t have as much to say about this one as I simply don’t understand music and don’t have a great ear for it. I can transmit how it makes me feel, but the technical qualities are quantum physics to me. I like to embarrass my wife by describing the music she recommends with the intellect of a caveman. Chopin’s Nocturnes are “pretty piano music”, Baroque Bach’s concertos are “fancy music”.

There’s a lot to love though. I’ve been lost in them while writing this post and I’m already up to No 4 in G Major. My enemies like to mock my people for supposedly fetishizing a made up concept of Western Civilization without even understanding anything about it besides marble statues and Renaissance paintings. While I will not give the devil his due on this, there’s still a lot of work to be done in improving cultural literacy. If I’m encountering skinheads though well-versed in the works of Brahms and Schumann, then my hope still springs eternal.

Thinking about how quickly I got married, I’ve had to learn how to live with someone else on the fly. It makes me understand the complaints about “adulting” a little better. Suffice to say I loathe the term and so should anyone else, the twee tendencies of my generation being among the most abominable things about us, but the root of the complaint I do understand. I heard some song from some band that sounded emblematic of the “failure to launch” Millennial generation that bemoaned the feeling of being left behind and being at fault for it. For as much as people like to accuse of finding blame in others, I think there’s more self-loathing that we couldn’t seem to figure it out than people are willing to admit.

Relationships aren’t real unless there’s real skin in the game. I was in relationships before my wife, but they were obviously never serious things. I’ve known people who were together for ten years–ten years!–before they got married. I don’t understand it. If you’re in it for the long haul then why not just do the ritual and complete the puzzle? I suppose I’m old-fashioned like that. Old-fashioned enough to marry someone after barely knowing them a few months. By my grandparents’ standards though it was a longer engagement–ours married after only knowing each other a month. They all stayed together, but that’s the power of cultural coherency and institutional inertia.

There seems to be this fear though that if you don’t have it all figured out before the pop question, then you’re just hurtling toward potential failure. Here’s the thing about relationships though; they all end. Either you call it quits or one of you dies. Every relationship has a timer on it, and no amount of trying to remain vague so that you can have some kind of plausible deniability to yourself is really going to change that. I’d rather just figure it out as I go along instead of waiting to say yes to life and death.

I’m posting a day early on this one as why not, no sense in waiting. I’m sure some people would love to have something to read Sunday morning at breakfast. My book is still available, as always, from Antelope Hill Publishing and the reviews are rolling in. People seem to like it. That’s all I can really ask.